skip to main | skip to sidebar


Katrina's final death toll was over 1800, by far the worst for a U.S. hurricane in recent history. As mentioned, most deaths occurred in New Orleans, and most were due to the failure of the levees. The levees have since been strengthened, many of the flooded areas have been rebuilt, and evacuation plans for those without transportation have been beefed up. Some of the devastated areas were never rebuilt, however, and many residents have permanently moved away.

Weather forecasts for Katrina were generally quite good, at least in the last couple of days prior to landfall. Dissemination of warnings was also effective; very few did not know that a major hurricane was coming. The problem, again, is that many residents were unable to heed the warnings and leave the area, which is the only foolproof way to survive a storm like Katrina. An analogy might be the Jarrell, TX F5 tornado of May 1997. The only reliable way to survive an F5 tornado is to go to a basement or other below-ground location, but many residents didn't have basements. This, sadly, contributed to the high death toll. In both this tornado and Katrina, many took the best option that they could (Jarrell residents went to the lowest level of their houses), but it wasn't good enough. Meteorologists are primarily concerned with ensuring that warnings are timely and accurate, and also that they are properly disseminated; the ability of residents to heed these warnings is not part of their area of expertise. It is, however, obviously of critical importance, so perhaps weather forecasters need to be more aware of it. Once a storm is actually approaching, it is of course too late to do much.

I was in New Orleans in January 2008, almost 2 1/2 years after Katrina. Although the water had obviously long since receded, I could still see many abandoned, flooded-out homes on the way from the airport to the hotel. There were opportunities advertised (I was at an American Meteorological Society conference) for touring some of these areas and helping with rebuilding. I didn't end up participating, for better or worse. (I was there only a few days and didn't have much free time, but I also must admit that it would have been a physically and emotionally dificult task.) I will be back in New Orleans for another AMS conference this January (2012); perhaps there will be other opportunities then.

The name Katrina has since been retired, as the names of all sufficiently devastating hurricanes are. (My namesake, Andrew, was retired in 1992.) Katrina has now been replaced by the similarly-named Katia (only two letters difference), which ironically is forecast to become a major storm in the Atlantic this week. Also ironically, another storm is forming in the Gulf of Mexico and looks destined to threaten New Orleans, but its name will be Lee. (And of course there is the recently departed Irene, which, although not remotely a disaster on the scale of Katrina, inflicted its share of destruction and misery.) Lee also does not look to become a storm of Katrina's intensity, but it could still be bad enough. Let's hope that it isn't.

Most people know about the horrific aftermath of Katrina, when needed assistance took days to arrive. Both federal and local governments were inexplicably slow to respond, resulting in miserable conditions among the survivors, and many preventable deaths. Media coverage was often sensational and innaccurate, with false reports of murders and rapes; the fact that many of Katrina's victims were black made it easy for some people to believe the worst about them.

The failure of the levee system, which led to most of the deaths in New Orleans, was forseeable. Years before Katrina (as early as 1986), design flaws in many of the levees had been pointed out. (For example, soil strength had been overestimated in their construction.) Projects to upgrade the levees were underway, but still only 60-90% completed by 2005. The fact that a major hurricane had never directly struck New Orleans was undoubtedly a factor in the slow renovation.

Poor coordination between the city, state, and Federal governments was another problem. In some instances, local officials waited to receive authorization from the Federal government, which never came. New Orleans mayor Ray Nagin also came under criticism; school buses were available to evacuate those without cars, but ended up not being used. Outside aid from a variety of sources waited uselessly, in some cases for days, again for Federal authorization. Inexperienced leadership at FEMA (Federal Emergency Management Agency) contributed greatly to the botched response. For example, FEMA head Michael Brown was unaware of conditions in the Superdome, or even that residents were sheltered there at all, until informed by CNN. Race and class (again, many victims were black and poor) also likely factored into the inadequate response.

To be concluded tomorrow (I promise!)

Posted by AndyVT at 5:56 PM No comments:

August 29, 2005, five years ago today, was the date of Katrina's devastating landfall in Louisiana. The storm actually made landfall for the first time four days earlier, cutting across the southern Florida Peninsula as a minimal Category 1 storm (top winds 80 mph). Moving westward and then northwestward over unusually warm waters in the Gulf of Mexico, Katrina attained Category 5 intensity. At the time of its greatest strength, maximum winds were 175 mph and central pressure was 902 mb (26.64 in). By then (August 28) the storm was heading northwestward, directly toward New Orleans, and residents were strongly warned to flee. Katrina weakened somewhat (to Category 3, with maximum winds of 125 mph) before making landfall near daybreak on Monday, August 29.

Because the hurricane's eye passed just east of New Orleans, the worst wind damage occurred along the Mississippi Gulf Coast. (To the east of the eye, the storm's forward motion adds to the counterclockwise circulation.) It appeared as if New Orleans would be spared the worst from Katrina. However, northerly winds behind the storm pushed water from Lake Pontchartrain over the levees; continuing heavy rains exacerbated the flooding. Numerous levee failures occurred throughout the city, leading to massive floods and terrible loss of life. In terms of death toll, Katrina was the worst hurricane to hit the U.S. since the Lake Okeechobee storm of 1928 (3000 dead). In the 20th century, only the Galveston hurricane of 1900 (up to 12,000 dead) had a higher toll.

Although residents of New Orleans were strongly urged to evacuate, many did not. As in any hurricane, a few defiantly chose to stay behind and were seen on national TV pledging to ride the storm out. Because of Katrina's great intensity, however, there were not many such people; even the usual die-hards knew better than to hang around this time. Virtually anyone who could got out as soon as possible. The vast majority of those who did not evacuate were simply unable to, lacking cars or any reliable transportation out of the city. Some buses were made available, but not nearly enough. As a result, the Superdome was used as a shelter of last resort. Unfortunately, the roof blew off in the storm, the power went out, and those inside were stuck for days without adequate food, water, or sanitation.

To be continued tomorrow....

Happy Birthday To Me

Or more accurately, to this blog. (My b'day is in October.) It was one year ago today that I completed my first post, done as an assignment for a quick intro course on using blogs in teaching. As you can see, I haven't done any more blogging, in the classroom or anywhere else, until today. But as commenter Jennifer noted, one post a year shouldn't be too hard. So I'm putting that theory to the test.

As for what to write about, it seems obvious to me that the topic should be hurricanes. Last time I checked, there was one hurricane (Danielle), one tropical storm (Earl), and one tropical depression (potential Fiona), all lined up in the Atlantic. Danielle should miss the U.S. mainland by a wide margin (although it may create rip currents along the East Coast). Earl is a bit more problematic, but it's still too early to really tell where it may go. And (potential) Fiona, who isn't even officially named yet, may be the most dangerous of all. At least that's my opinion based on one long-range forecast model, which is not at all infallible. (Neither the model nor my opinion are infallible, just to clarify.)

Tomorrow is the tragic fifth anniversary of Hurricane Katrina's landfall, so as long as I'm posting on hurricanes, I think I'll make a more detailed post then. I envision it as being partly on Katrina and partly on other fascinating (to me, anyway) information on hurricanes. 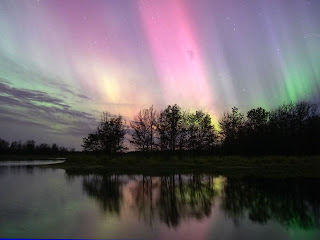 This is my first post on my new blog. As a meteorologist, I figured an appropriate name for the blog would be "Hot Air", although it really isn't very original. But I'll do originality later.

I plan to share my thoughts on the weather, or any other topics, as they arise. Feel free to comment as you wish, but try to keep all replies on-topic and non-threatening.

The aurora forms when charged particles from the sun interact with the upper atmosphere. They usually occur in polar regions, but when the sun is especially active they can occur at lower latitudes. The above aurora was observed over Wisconsin.
Here is a video that shows the danger of getting too close to a tornado. Note the rather unsettling way that it ends. It is rumored that the photographer was killed by the tornado, but this was never conclusively determined.
Posted by AndyVT at 8:54 AM 10 comments: